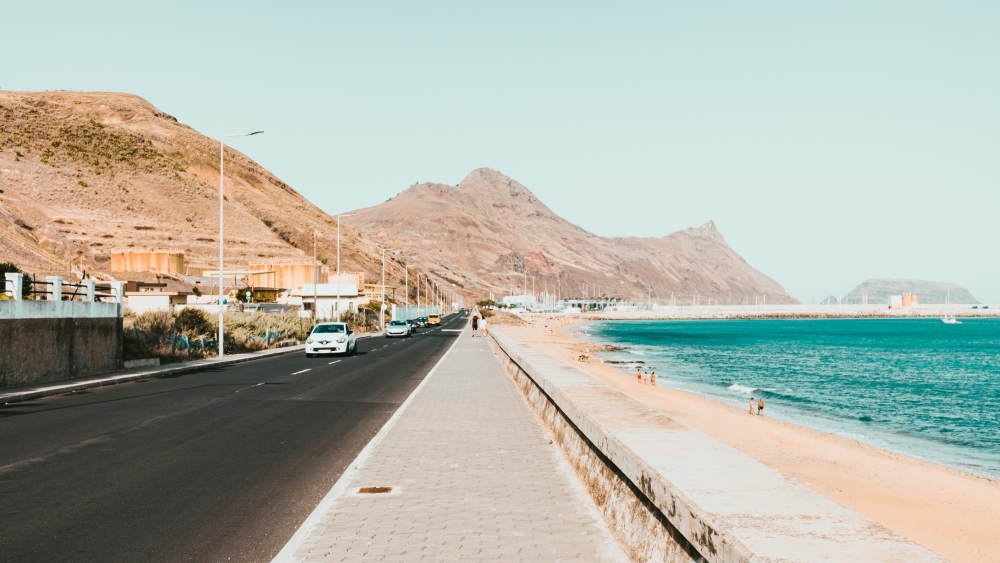 Porto Santo, a Portuguese idyll whose beaches are regularly voted best in the world, is transforming itself into an open-air laboratory. The North Atlantic island, some 500 miles east of Casablanca and roughly on the same latitude, gets a good amount of sun and wind. But, in 2017, these renewable sources accounted for only 15 percent of Porto Santo’s electricity supply; the rest of the energy mix came from non-renewable resources. And as is the case for most jurisdictions looking to green their grids, intermittent supply—when clouds roll in, say, or the wind dies down—was a roadblock. So when the regional government launched the Smart Fossil Free Island project, with the aim to become fully self-sufficient in terms of energy, they knew they had a way to go. The first step? Give the island’s power grid a steady energy source to decrease its carbon footprint.

In 2018, a partnership was formed between local energy supplier, Empresa de Electricidade da Madeira (EEM), green tech company The Mobility House and carmaker Renault. The plan was to use electric car batteries connected to the power grid to store energy generated by renewable sources for a rainy (or cloudy, or not windy) day. It went well: “The Porto Santo test offered a strong proof of concept,” says Zach Woogen, policy specialist at the Vehicle-Grid Integration Council, a national advocacy group. “We’ve since seen it implemented in many new geographies, as electric vehicle (EV) adoption rapidly scales.” Here’s how the island tackled its vehicle-to-grid (V2G) experiment.

1. They built a better grid

The companies behind the project transformed Porto Santo’s grid in three phases. First, Renault made 20 electric cars and vans available to locals. This new fleet was supported by forty smart charging stations installed across the island. These chargers dynamically modify their charge rate in response to real-time constraints, temporarily pausing, for instance, when the grid is at risk of being overloaded. V1G—as this mechanism is known—is key to limiting the impact of too many EVs charging at the same time.

Second, hardware was installed on some vehicles so that they could feed energy back into the grid, using V2G power flow. EV recharging is maximized when lots of renewable energy is available; when less is on hand—that rainy day we were planning for—V2Gs act as mobile storage to help regulate the grid’s voltage. (The cars are smart enough to always keep enough electricity on hand to be driven.) So the energy that was bought for cheap on a sunny day is sold back to the grid at a premium when it’s most needed, imposing a subtle but important shift in what it means to own a car: it can earn you money.

2. They upgraded their tech

A grid that draws energy from solar, wind, stationary storage and V2G is definitely more flexible, but it’s also more complex, and requires sophisticated tools that help grid operators dispatch the electricity in a controlled way, whenever and wherever it’s needed.

The brains of the Porto Santo smart grid came courtesy of an intelligent software from The Mobility House. Created for the Smart Fossil Free Island project, Marketplace uses an algorithm to balance supply and satisfy demand, automatically routing surplus renewable energy towards stationary storage and EVs, and drawing power from those same resources when renewable energy is in low supply. Drivers can set a minimum charge for their EV battery to make sure they always have enough juice to get where they need to go. Marketplace also helps customers save money by delaying EV charging when demand is high, avoiding peak energy prices.

In six months, the share of renewable energy used in Porto Santo increased by over 16 percent, showing that V2G and battery storage can inject stability as renewable energy capacity is added. What’s next for the island’s self-sufficiency goals?

Porto Santo’s electric fleet is currently around 100. According to a report by the BBC, the island would require 500 bidirectional EVs to run the electricity grid full-time. Porto Santo could add more battery storage capacity, but because energy consumption spikes during the summer with tourism, it isn’t viable to exceed 80 percent penetration of renewables.

Another option involves new infrastructure: The island could increase the number of solar farms and wind turbines to meet peak demand in the summer tourist season, and build an interconnector to export excess power to Madeira—a larger neighboring island, 25 miles to the west—during the off-season.

While smart grids are being piloted on other island nations in the Atlantic, closer to home, various US states are investigating V2G, thanks in part to increased interest in EVs. “Widely deployed, V2G technology could allow utilities to aggregate EVs to act as a virtual power plant,” Cameron Freberg, utilities strategist at Austin Energy, told Public Power. “EVs could become a source of clean, dispatchable power during periods of peak demand.” And they can make you money. By opting into smart charging schemes, drivers can earn about $65 through V1G per year, and up to $300 yearly through V2G. But it’s about more than pocket change.

“I believe the future of V2G systems is bright,” adds Dr. Eisenhauer. “On the mainland, EV infrastructure and awareness of these systems are the primary barriers to their growth, but these barriers are being broken down.” Thanks to small islands like Porto Santo engaging with big ideas, your EV may be able to play a (decentralized) role in our next energy grid.

V2L explained: What it is, how it works and what it means for the grid of the future