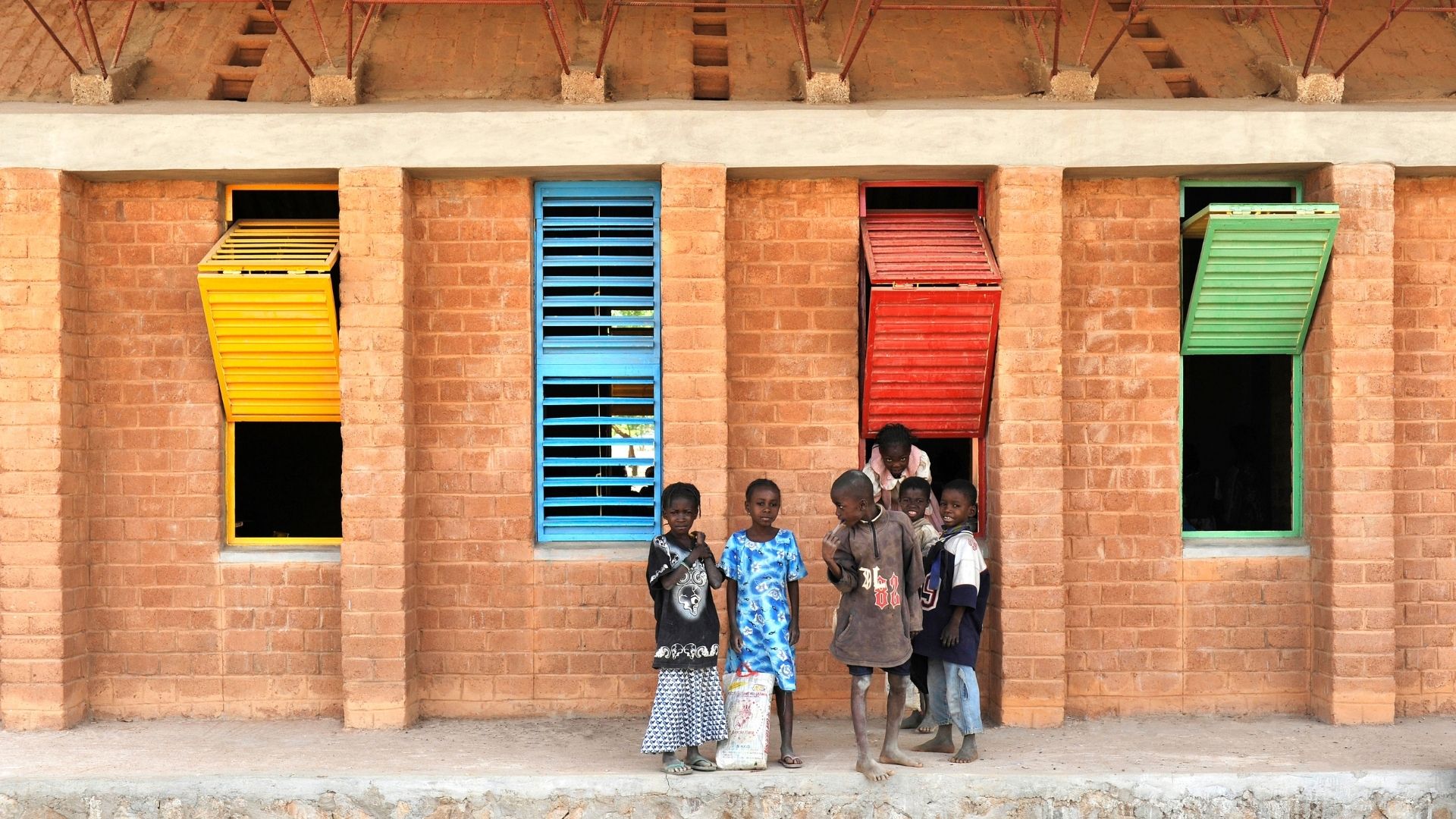 Architects are using the age-old, sustainable technique of building with mud to improve the lives of many.

When Diébédo Francis Kéré returned to his childhood home of Gando, a dusty village on the fringes of the Sahel in Burkina Faso, he decided to build a school. His purpose was simple: make it possible for children to attend classrooms comfortably in a region of extreme heat. The project, completed in 2001, was grounded yet groundbreaking: it is mainly built using mud. Three years later, the school won the Aga Khan Award, which recognizes architects who have designed buildings that meet the needs and desires of Muslim communities. It set in motion a career trajectory that elevated the Berlin-based Burkinabé architect to the status of one of the world’s most celebrated architects with a paradigm-shifting approach that uses materials such as mud to create sustainable high-quality buildings at low cost in some of the world’s poorest countries.

In Burkina Faso, buildings made from earthen materials have long kept people cool in the heat and dry during the rainy season. But West Africa’s rising living standards and fast growing populations mean those who can afford it are ditching mud-built homes for those made of concrete. Kéré is part of a generation of eco-minded architects that wants to reverse this trend. They are demonstrating the benefits of sticking with mud, designing buildings that are both beautiful and practical – and making substantial improvements to quality of life in the process. The rest of the world is taking note.

Sustainable architecture is not a new phenomenon in West Africa. Vernacular architecture (architecture designed based on local needs and traditions) has been the norm in the region for centuries. Striking examples include a collection of mud-brick mosques, such as the Great Mosque of Djenné in Mali, which dates back to the 13th century. What is new is how modern architects are reinterpreting the use of West African vernacular building materials to meet 21st-century needs.

Parts of West Africa, notably the Sahel, are plagued by resource scarcity, explosive population growth and poverty; the average person lives on less than two dollars a day. Adding to this, the consequences of climate change are fast accelerating with increased heat and desertification. Temperatures across West Africa in countries such as Burkina Faso regularly hover above 40 degrees Celsius and rainfall is erratic. More than ever, the region’s architecture needs to be sustainable and affordable.

Eschewing lavish designs for functional spaces, Kéré’s simple yet elegant Afro-futurist designs place him at the vanguard of a movement to create sustainable buildings using local materials. This year he became the first African winner of the Pritzker Architecture Prize, regarded internationally as architecture’s highest honor. The jury noted that his work “reminds us of the necessary struggle to change unsustainable patterns of production and consumption.” Other architects in the region are following his example.

“Burkina Faso is a landlocked country and the current crisis in the field of construction materials has made imported ones such as cement, wood, sheet metal and glass expensive and difficult to access,” explains Clara Sawadogo, another Burkinabé architect who incorporates adobe bricks and mud into her building designs. She believes imported materials are unsuitable for construction in a climate with temperatures reaching 47 degrees in the shade.

“The consequences of climate change here are well established: periods of excessive heat are intensifying each year and rains are becoming more unpredictable. It’s resulting in floods and violent winds,” she says. “The construction sector is one of the biggest energy consumers, so it should provide efficient solutions with a view to respecting and preserving the environment.

Last year, humans used 30 billion tons of concrete to help build new cities. While concrete is strong and can withstand extreme temperatures, its carbon footprint is very high, accounting for eight percent of human-made emissions. Yet demand for concrete is rising faster than for steel or wood. Alternatives exist, but they are still in the early stages of development.

By contrast, mud is virtually carbon neutral. Also known as adobe or clay, it can be gathered from the ground with minimal effort, without expensive machinery or transportation, and it produces no waste in the construction chain. “Mud comes in different shapes, colors, textures, qualities and its potential is unlimited in architecture,” says Sawadogo. “It significantly reduces excessive heat inside buildings and thus saves energy consumption through air conditioning.”

But convincing villagers to stick with mud is not easy. Traditional earthen architecture is seen as old-fashioned, associated with poverty and underdevelopment. And it certainly has some drawbacks: buildings must be located far away from rivers, lakes and floodplains or they risk collapsing. As Sawadogo explains: “Walls need to be covered with a good waterproof but breathable coating and a roof that does not retain water and the coating needs to be maintained every two-to-three years.” However, well-maintained houses built from mud have been known to last for centuries, withstanding heavy rains and strong winds.

Kéré’s school in Gando takes advantage of the energy efficient cooling properties of mud, due to its high thermal mass, with walls that are thick enough to keep the classrooms comfortable in temperatures above 40 degrees. Heat escapes through a brick ceiling and an overhanging, and an elevated roof provides ventilation without the need for air conditioning. The school also has a rainwater harvesting system that collects water during the rainy season and stores it for use during the dry season. The success of the project increased the school’s student body from 120 to 700.

Another building designed by Kéré is the Burkina Institute of Technology in Koudougou, which was built in 2020. It’s made of poured local clay, which is cast in-situ and clad in a layer of eucalyptus wood for additional passive cooling. While classrooms require air conditioning because of computer equipment, the heat-absorbing clay walls make a significant contribution to cooling interior spaces and improve energy efficiency, meaning the air conditioners don’t need to work as hard to keep things cool. Landscaping work to protect the buildings during the rainy season channels water into a subterranean tank, which is later used to irrigate mango plantations on the campus.

Located in neighboring Ghana, Hive Studio specializes in using a material called rammed earth, a natural combination of earth, gravel, silt, clay and cement that can be used to create monolithic walls. Rammed earth is an excellent insulator and helps to absorb significant amounts of heat, making it perfect for use in hot climates like Ghana. In 2018, Hive Studio used rammed earth to build a mud cafeteria for the community in the northern Ghanaian region of Sang. The firm is also using the material to build a five-bedroom house in a suburb of Accra, and it has used it to renovate a beach club in Ghana’s capital.

While sustainable architecture in West Africa is often designed with the climate in mind, the region’s cultural and historic context is also important. Ever since the days of European colonization in the 19th century, most architecture across Africa has been reliant on imported materials and foreign modes of design that are completely alien to that of traditional earthen architecture. But there is a deep-rooted tradition of local design. Groups like the Dagara people of Ghana, Burkina Faso and Côte d’Ivoire have always seen the built environment as an extension of the natural landscape, a way of thinking that has created spaces that exist in harmony with nature, rather than dominating it.

Kéré’s school in Gando takes this approach, with classrooms that are built around a courtyard where students can sit and study in the shade of trees. The school also has a large roof that provides protection from the sun and can be used for outdoor classes or events.

Mud isn’t the only traditional material being used by architects in West Africa, with wood, thatch and other natural elements such as laterite and granite finding their way into new buildings. This is not only good for the environment but also the local economy, explains Sawadogo. “By using local materials, architects are supporting the livelihoods of those who produce them,” she says. “In a country like ours, adobe remains the most suitable material thanks to its availability, thermal comfort, its low cost, minimal environmental impact and for its entirely local aspect, not to mention national economic benefits, and the fact gives jobs to local workers.”

Kéré’s work has been recognized around the world, which Sawadogo says offers hope for the future: “It’s a springboard for the development of architecture using local materials, in a country where mistrust and preconceptions about the earth material still hamper the desire of some individuals to use it. The land is a gift of nature in Burkina; why should we look elsewhere when we have an answer at hand, whose wealth we have not yet finished exploring?”

From an ability to adapt to the local climate to the use of traditional materials, West Africa is setting a precedent for the rest of the world to follow: redefining how to design high quality buildings economically with the environment in mind. As Kéré put it when accepting the Pritzker Prize: “I am hoping to change the paradigm, push people to dream and undergo risk. It is not because you are rich that you should waste material. It is not because you are poor that you should not try to create quality. Everyone deserves quality, everyone deserves luxury, and everyone deserves comfort. We are interlinked and concerns in climate, democracy and scarcity are concerns for us all.”

How to install an EV charger