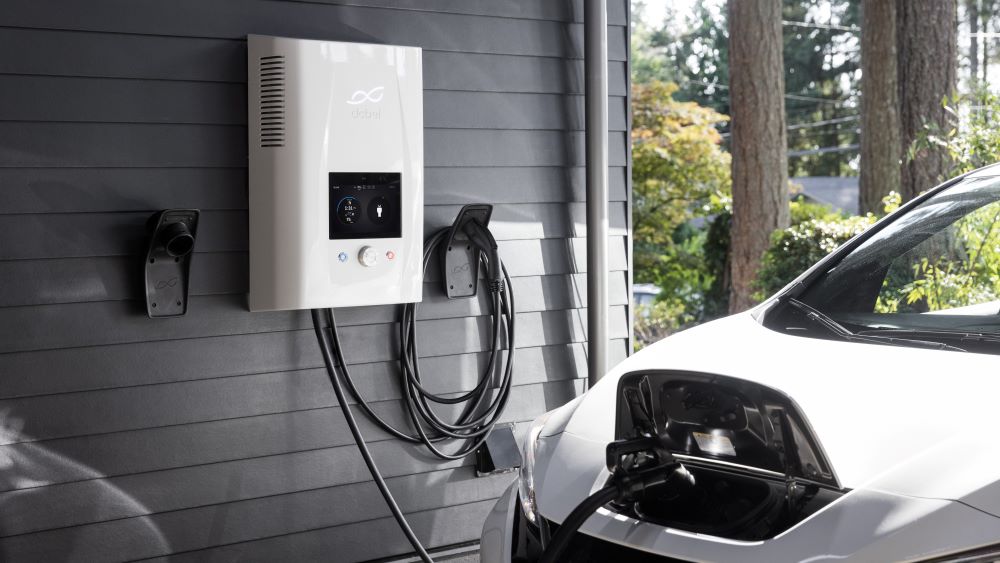 Does charging your EV at home feel slow? It’s not your imagination – Level 2 charging is not very efficient. DC charging at home can safely speed up the process.

When driving one of the latest electric vehicles (EVs), you get the sense that these machines were designed to get you to your destination in a hurry. Instant torque propelling the car as fast as it can go feels like the future of mobility.

One EV component has a built-in bottleneck

And it’s not just EVs: All the battery-powered devices we use daily require an AC-to-DC converter, which we know best as the infamous power bricks attached to power supply cables. Due to the size and scale of EV charging, it’s unreasonable to separate the onboard charger from the vehicle during this early stage of market adoption.

The convenience of using a household outlet (AC power delivered by a Level 2 charger) to charge an EV (DC battery) comes at the expense of efficiency. When relying on the car’s onboard converter to do the heavy lifting during charging, a significant amount of energy is lost. One study found that the onboard charger is the weakest link in the chain, responsible for more losses than all other components involved in charging an EV using an AC power source. They note that “high percentage losses are not surprising in charging equipment that must be designed to operate over a wide range of currents and voltages.”

How efficient is AC charging on the Ford F-150 Lightning?

On page 31 of Ford’s EPA application for the 2022 F-150 Lightning pickup truck, it’s revealed that the EPA required 114.5 kWh worth of electricity to recharge the truck’s 98 kWh battery. That translates to an efficiency rating of less than 86 percent, and demonstrates just how much electricity is lost during Level 2 (AC) recharging: 16.5 kWh did not go towards recharging the battery. To put that in context, 16.5 kWh can power an average home in California for almost a full day.

While it’s impossible to create a system with 100 percent efficiency due to the laws of physics, it’s important that home EV charging strives for higher standards so that homeowners can save money and avoid wasting valuable electricity. Generally, EV onboard chargers are around 80 to 90 percent efficient at AC to DC conversion.

What’s the most efficient way to recharge your EV at home?

DC energy is everywhere these days – and it’s reshaping the way we think about the power grid. The growth of decentralized renewable energy generators that mostly produce DC is at odds with our centralized AC power grid. All the machinery used to make DC compatible with our grid is rendering it increasingly inefficient and insecure. This along with increased demand for DC, thanks to the proliferation of power electronics and EV chargers, has experts proclaiming that DC is the future of grid design.

How does this affect you? When it comes to the future of home energy, DC will play a central role because of how versatile it is. Rooftop solar panels generate DC, meaning that you could charge your car and power your home efficiently with solar energy produced right on your roof at no cost to you or the environment. EVs are also becoming bidirectional, meaning the DC power stored in their batteries can be used to power your home or even sent back to the grid, increasing the amount of clean energy available during times of peak demand.

To tap into the new smart home energy capabilities made possible by DC power, including fast DC charging and vehicle-to-home power flow (V2H), homeowners will need an inverter – a machine that transforms AC into DC and vice versa. Standalone inverters (those typically mounted on a wall) are generally much more efficient than the unidirectional onboard chargers crammed into vehicles, evidenced by the fact that public DC charging stations typically achieve upwards of 90 percent efficiency.

Bear in mind that DC fast charging (DCFC) stations can damage battery chemistry over time if overused because they generate very strong current and a significant amount of heat. Home DC chargers are not susceptible to this issue because they offer a more manageable level of power. When delivered at a charge rate below 50 kW, DC charging is not harmful for EV batteries.

Preliminary tests reveal that the dcbel r16 home energy station, which can deliver 15.2 kW of DC, has an efficiency rating of 96.3 percent. This means that charging a 98-kWh battery (our F-150 Lightning again) would require just 102 kWh of power in total.

What are the costs of Level 2 charging at home?

California residents pay 27 cents per kilowatt hour, more than any other state in the Lower 48. An average resident of the Golden State drives just over 12,500 miles per year.

Covering this mileage in an electric pickup truck which is only recharged using a standard Level 2 AC unit at home would require around 54 charging sessions. Factoring in the inefficiency reported in the EPA document, the driver would be devoting a total of 6,189 kWh to charging their vehicle – 897 kWh more than what’s absolutely necessary.

This translates into an extra cost of $242 per year – and according to the EPA’s Power Profiler data for California, an additional 484 lbs. of CO2 emissions added to your home’s carbon footprint. That environmental impact is comparable to driving over 950 miles in the average gasoline-powered vehicle.

Along with being safer for your battery, DC charging at home is more economical than DCFC on the road. According to a report by McKinsey, electricity purchased at a public charger can cost five to ten times more than electricity at a private one.

An EV is more than just a means of transport. When it’s parked in your garage, an EV battery becomes an energy asset that you can leverage as you wish – a reserve of clean energy that can power your home during an outage, or be exported to the grid in exchange for financial incentives. Level 2 AC chargers are not compatible with smart home energy applications like these, nor can they deliver faster DC charging via solar or grid energy. While the price of standard Level 2 AC chargers may be on the decline, hidden costs to the environment, your pocketbook and your time can’t be ignored.